Pharmacy currently consumes about 13% of the overall health care dollar. The U.S. is the only country without some type of price control on pharmaceuticals. The main argument about this is: if there are price controls on drugs, Research and Development will be curtailed and that would be detrimental to the American people. This, of course, is the time-honored response from Big Pharma. It’s interesting that there are a lot of European and Asian drug companies that market drugs in non-U.S. countries (with price controls) for years before they ever come to the U.S. and they are doing quite well with enough funds to do R&D and produce new drugs. Big Pharma in America never seems to be able to explain that. This is so ingrained that a U.S. Congressional white paper came to the same conclusion. Of course, all of our legislators are getting huge sums of money from Big Pharma, so this is no surprise.

As has been the case since I was in Medical School in the 1970’s, the typical Pharma company spends more on sales and marketing than R&D. The Medical School I went to had a pie chart tacked up on the student lounge bulletin board showing this fact. But you don’t have to take my word for it, or presume that, since this is 40 years later, that this isn’t still the case. Here’s a recent analysis for you: 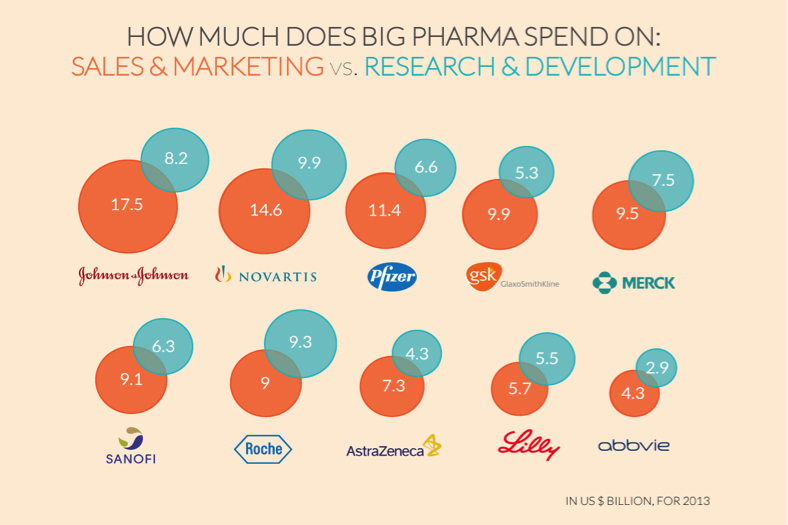 So, the whole R&D defense is a sham. DO NOT BELIEVE IT!

What really drives the price of drugs is what Pharma industry executives blatantly say: “What the Market can bear”. The CEO of Gilead, which markets Harvoni, a drug that cures Hepatitis C, for about $100,000 for a 12-week course, actually said this in an interview. The person who created the drug (using NIH grant money, yes, your tax dollars) says it only costs $1500 to make. It’s kind of like “Do you want to live? Pay the price!”. This is not like what most businesses do when they price a product. Usually it’s what it cost to develop, what it costs to manufacture the product, what, if any, warranty adjustment needs to be added, and then a reasonable margin (usually a fraction like 5%, 10%, even 50-100%), not 67 times the production costs, in order to create a price point that their target market can afford. By the way, Gilead bought the rights from the guy who developed the drug (with your tax dollars); they didn’t even do the R&D!!

A recent article in JAMA Internal Medicine has revealed that U.S. drug prices have no relationship to anything except what a Pharma company decides to charge. They consistently say they charge “what the market will bear”. Want to live? Pay $1 million. Or…die!

You’ve likely seen the recent TV and Newspaper articles about the Epipen (Mylan). The price has risen 6-fold in the last few years while the CEO’s salary has gone up a similar amount. So, now it is $600 for a pen. That’s because they are now the only U.S. company making it. So, they can charge whatever they want. The really interesting thing is, due to public pressure, they are saying they’ll market a “generic” version for about half the price. Really? Epinephrine is a brand drug? Not generic? Check this out:

“The active compound of epinephrine was isolated as an iron complex and marketed in 1900 by Farbwerke Hoechst as Suprarenin. In 1901, Parke-Davis began to market Adrenalin, the manufacturing of which was challenged by rival companies. Further analysis of the product revealed a lack of purity, and further chemical structures were proposed. In 1906, Hoechst began production of synthetic epinephrine, the introduction of which made the hormone more cheaply available on the market.”

Epinephrine has been generic for about 100 years!!

And as far as the “pen” is concerned:

“The injectable delivers a dose of epinephrine, otherwise known as adrenaline, to treat extreme allergic reactions. It’s been around for more than a century. And the pen that delivers the medication has been around since the 1970s, when it was first developed for the military. Since 2007, the price for a two-pack has gone up from $93.88 to $608.61, an increase of more than 500%.”

So, how does Mylan get away with this? And how can this be called a brand name when it has been generic for years (Patents expire in 14 years).

It’s due to your Pharma friendly FDA and USPTO (the Patent Office) and the rules they promote. That’s in another of my blog posts.

And, if you research the Canadian Pharmacy system, you’ll see that there are several companies marketing the epipen there and the costs are about $120 for a single and $170 for a dual pen prescription, OF WHICH MYLAN IS ONE OF THE MANUFACTURERS!!!

You see, the FDA and USPTO allows a Pharma company to keep marketing any drug as a brand drug no matter how old the drug is. Here’s an example:

Hydrochlorothiazide (HCTZ), a blood pressure medicine, has been around since 1959, and was first marketed by Merck and Ciba. So, it went generic around 1973. Here are the current prices (goodRx.com) for HCTZ:

Here’s another one. Sulfasalazine was developed and marketed in the 1950’s by Pfizer. It is an anti-inflammation drug:

Here’s another Pharma game. A Pharma company is first to market for a drug either in a class of drugs or used for a specific condition. They price by “what the market will bear”. It has nothing to do with manufacturing or R&D costs. Six months later, a second company markets either a “me, too” drug in the same class, or a drug in a different class treating the same condition. What does the second company charge? THE SAME PRICE AS THE FIRST DRUG!! The rationale – the market was bearing the price of the first drug, so, why not price it the same?

Restasis is that eye drop that has a lot of ads on TV for several years. Recently another eye drop, Lifitegraf was approved for the same indication. Check out this table from The Medical Letter, a physician newsletter that gives physicians an unbiased review of drugs. It also shows you prices. 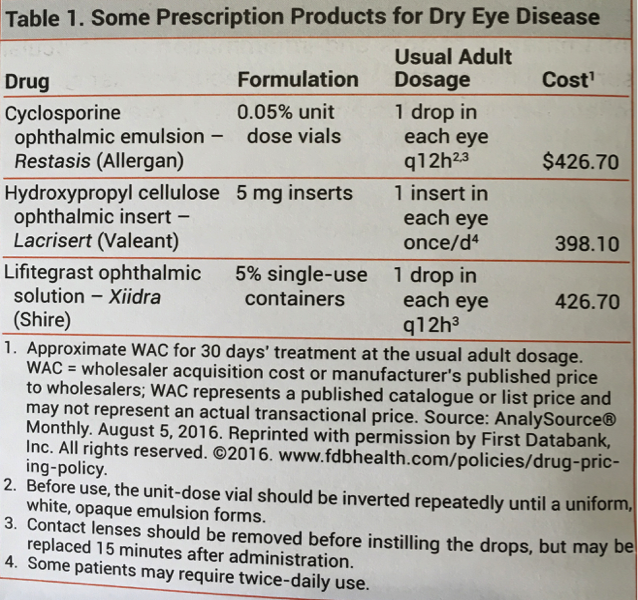 First, hydroxypropyl cellulose drops are just artificial tears, not an active drug. The new active drug costs exactly the same as the first drug. How likely do you think the R&D and manufacturing costs and the margin calculations are identical for both drugs? Well, I’m hear to tell you they aren’t. The second drug company knew people would pay $426.70 so that’s what they are charging.

Here’s another game they play. It’s supported by FDA/USPTO rules (which should be changed).

The FDA and USPTO allows a drug company to have exclusive rights to make and market a drug for 14 years so the drug company can recoup R&D costs. Here’s how drug companies abuse this.

There’s an aspect of organic chemistry that is at play with drugs because they are organic compounds. When the molecules are formed in the chemical reaction, you get two versions of the same compound, a right hand and a left hand version. Just like your own hands (and feet!) both your hands are hands but the spacial orientation is opposite. So you can’t put a right hand glove on your left hand, even though it is a hand. This is called a racemic mixture. It’s usually 50/50, just like your hands are 50/50. It turns out, in a lot of cases, one drug “hand” is not as active as the other “hand” or may not be active at all. However, you can separate the two. They are called “isomers”. One is the “D” isomer (right hand, “dexter”)and one is the “S” isomer (left hand, “sinister”). You can separate these from each other. Usually a simple process.

What drug companies do is, they market the racemic mixture for 14 years so they can call it a brand, have exclusivity, and price it as they want and no one else can make it and they can get their R&D and marketing costs paid for. Then, as the patent is running out, they submit to the FDA and USPTO the active isomer as a new and different drug AND THE FDA AND USPTO ALLOWS THEM TO CALL IT NEW AND DIFFERENT and gives them another patent for 14 years! So the drug company doubles their time of exclusivity WITH THE SAME DRUG! All they have to do now is convince prescribers and the general public that the “new” drug is better than the “old” one (this is the marketing costs you see in the above figure).

The classic example is omeprazole (Prilosec) originally developed by AstraZenica. When the patent for Prilosec was running out, AstraZenica got the FDA and USPTO to grant brand designation to the right hand version of omeprazole, esomeprazole (probably really desomeprazole or D-omeprazole) as Nexium. AstraZenica had been marketing Prilosec as the “Purple Pill” for 14 years. Overnight, Nexium became the “Purple Pill”. The only difference between Prilosec and Nexium is you only need half as much Nexium as you would need Prilosec, because the 50% non-active isomer was removed.

Here’s an excerpt from Drugs.com about Nexium:

$5.6 billion in one year alone (remember they got another 14 years for the same drug)! At the same sales rate per year over 14 years that would calculate to $78 billion on basically the same drug as Prilosec! No R&D costs! A mega-blockbuster!

Guess what? You paid for this in your taxes (Medicaid and Medicare) and insurance premiums. Forty 20 mg Nexium prescription capsules cost $310.60 (goodRx.com). This was the cost for 14 years. Now, Forty-two 20 mg Over The Counter Nexium OTC cost $23.99 (Target, Wallgreens). The “market could bear” the prescription $310 cost for 14 years. Of course the doctors were 50% of the problem because they prescribed it. FYI, I never wrote a prescription for Nexium except when I saw someone else’s patient who was on it and they needed a refill when that physician wasn’t available.

OK, so I hope you’re getting the point about Pharma.

By the way, 20 years ago, the main marketing approach for Pharma was convincing doctors to prescribe their drug. Many studies showed the biggest influencer of physician prescribing was not the medical literature but the extent of Pharma “detailing” (Pharma reps going to doctor offices with pizzas, holding evening dinners, sponsoring conferences, etc.). Then the court rulings related to the first amendment allowed drug companies to advertise drugs on TV to the general public. Sales jumped more with direct to consumer (DTC) advertising than advertising to the prescriber (doctor). Yes, doctors bent to the request of a patient who saw an ad on TV vs. going with the medical literature. And I guarantee the drug companies were pretty sure this was going to happen before they pumped tons of money into DTC advertising!

Also, this is one example of why the free market enterprise system doesn’t work with health care because the stakes are different. It’s your life at stake.

Because it’s all about the money.