You’ve heard this before. The health care costs in the United States costs a lot more than other countries. Here’s a couple of charts from the Commonwealth Fund’s U.S. Health Care from a Global Perspective publication: 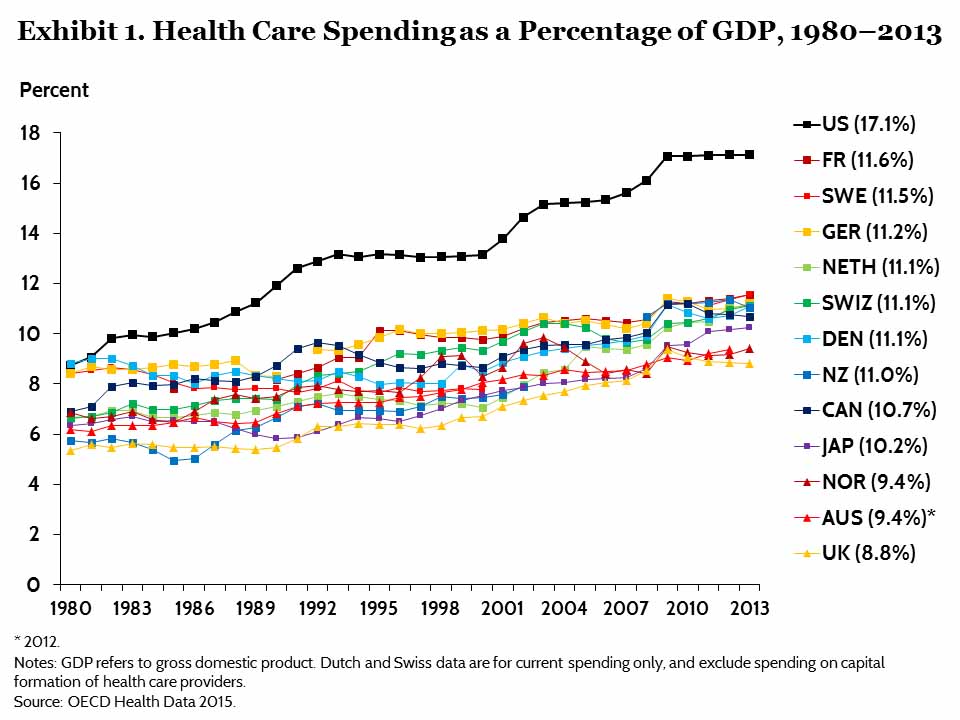 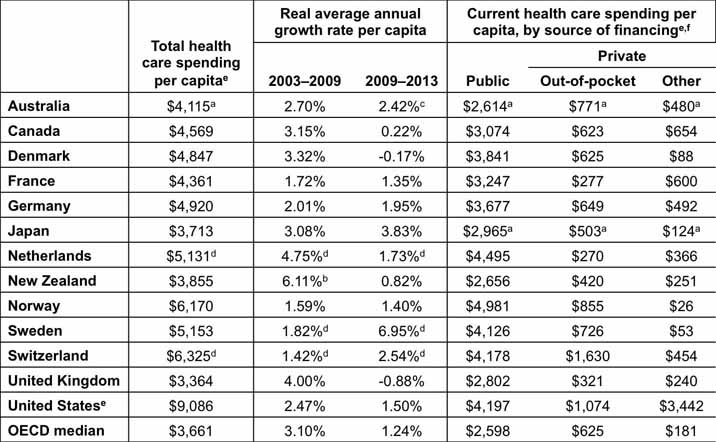 Here is their conclusion in the executive summary:

“Higher spending appeared to be largely driven by greater use of medical technology and higher health care prices, rather than more frequent doctor visits or hospital admissions. In contrast, U.S. spending on social services made up a relatively small share of the economy relative to other countries. Despite spending more on health care, Americans had poor health outcomes, including shorter life expectancy and greater prevalence of chronic conditions.”

So, what’s going on here?

Well, the root cause of the two main drivers cited by The Commonwealth Fund is the fact that the United States Health Care Industry is based in the US economy, which is a free enterprise/capitalism economy. Health care service providers take advantage of that fact. You’ll see how technology company marketing and health care service provider pricing behavior, which is consistent with free enterprise, significantly drives healthcare costs.

The best way to delve into why these two factors are the main drivers and why other lesser factors are driving health care costs is to use the analysis and conclusions from an article by Don Berwick, MD and Andrew Hackbarth, MPhil entitled, Eliminating Waste in US Health Care published in the Journal of the American Medical Association (JAMA, April 11, 2012—Vol 307, No. 14).

Berwick and Hackbarth categorize excess health care costs into categories of waste. Overuse of technology and high prices are imbedded in those categories, as you will see.

Here are the categories of waste:

Berwick and Hackbarth define this as “the waste that comes with poor execution or lack of widespread adoption of known best care processes.” Notice the emphasis on “processes”.

So what does this mean?

Of course “poor execution” Seems obvious. Someone fundamentally did things wrong, like a surgeon operating on the “wrong side” (e.g., cut off the wrong leg; yes, this still happens) or leaving a sponge or instrument in a person during a surgery (yes, this still happens). It turns out that at least 80% of “poor execution” is actually due to poorly designed health care processes that either don’t prevent human error effects or that create errors of their own. About 20% is due to people either doing things for which they aren’t adequately trained or they are just malpracticing.

This “process” orientation, poorly designed processes being the reason for the vast majority of failures in this category, is still a difficult concept to grasp for health care administrators and workers.

So, now I’m at lunch and I mention to the fellow on my right that this statistic has been frustrating for many years. He was the Medical Director for the Internal Medicine department of one of the premier medical systems in the US. He said that, last year, he was at a similar conference with a similar hypertension session quoting the same statistics. He said to himself, “I’m the Medical Director of one of the most prestigious Internal Medicine departments in the US. My statistics on hypertension can’t be as bad as that.” So, he returned to his institution and had his assistant pull all of his hypertension patient charts and do the same statistical analysis. He said, “Lo and behold, I had the same statistics! Only about 50% of my hypertension patients had a controlled blood pressure!” So then, he had the entire department do the same analysis. Yes, several dozen Internists. And again, they all had pretty much the same statistics, only about 50% of their hypertensive patients had a controlled blood pressure! “The internist we all believe is the best Internist in our institution and the internist we feel is ‘less skilled’ than the others had the same results, a 50% hypertension control rate!” he said.

I looked at him and said, “Since the national, departmental and your own personal statistics and your “best” and “worst” internist have exactly the same statistics, what does that tell you?” He just looked at me without an answer. I gave him about 5 seconds to respond then said, “To me, it’s obvious that the process for treating blood pressure that we’ve all been trained to do is creating this result, since everyone has the same outcome, no matter whether an individual is considered excellent or not or where they live.”

I’m not sure what he did with that piece of information, but it was interesting that he hadn’t figured that out.

The team changed the process of care and was able to measure the components. We knew, for example, what percent of a PCP’s patients with initial high BPs got a second BP at least 10 minutes later. We knew if a patient was supposed to come back within 60 days, what percent did. Etc. APC’s saw the majority of patients, spent more time with them. A formal standardized patient education module was administered to every HTN patient.

Within 2 years, the BP control rate was 82%! The process redesign had worked. The Medical Group actually got an award for this.

First, the medical industry is steeped in a task orientation of improvement and management. The classic way the medical community “changes” something is to have an “inservice” (a classroom type activity that can range from a couple of hours to several days). It’s mostly a didactic session. Sometimes there are some simulations and 30-60 minutes of “practice”. Then everyone is given a binder or a CD-ROM and “certified” and sent out to do what they were “trained” to do. The problem is, that isn’t “training”. And there isn’t any follow-up to prove that the “training” actually worked. There are ways to do this. One is called the Kirkpatrick Model of training effectiveness, to which I subscribe. It has four levels of assessment. Level 1 is an assessment by the participant that the training was well-organized, challenging, etc. Level 2 is, did the participant actually learn something (you do a pre-and post-test to figure this out), Level 3 is, did the training actually change the way they did work, i.e., did the employee retain the information and was he/she using the new way of doing things, and Level 4, was there actually a positive impact on the business results.

Training requires daily oversight by an expert until the trainee can do the work correctly. A Medical Director I know once said, “You don’t give a 2 hour 100 slide presentation to an army recruit on how to handle a gun and consider him trained.” They spend hours on the shooting range with a drill seargent. There’s no similar situation in health care.

I’m here to tell you that, unless I was running a project and did these four things, they were never used by health care managers or the HR departments that ran the trainings. Consequently, when people left the trainings, they pretty much went back to the old way of doing things.

And remember, the way medical systems do improvements is they teach staff a new task, usually without subtracting a task, so, the new task is just more work. Since no one is measuring, there is no accountability. The actual process of care isn’t examined or changed.

A hospital had a consultant group come in to train surgeons and OR staff on “Team Training” based on the aviation industry practice. This consisted of a pre-op briefing (what do the staff need to be aware of), a “time-out” before starting surgery where the team ran through a checklist, and a de-brief (what went well, what didn’t go well) after the procedure. The consultant did multiple week-long sessions for all the surgeons and hospital OR staff. Everyone was high-fiving when everyone was “trained” and leaders got kudos at management meetings. Six months later, no one could report on what the adoption rate was and the frequency of “never events” (those wrong side surgeries and articles left in patients) hadn’t changed. The consultants had added three tasks. The process of doing procedures didn’t change. No tasks were subtracted to “make time” for the new tasks.

And here is a truism about the “Failures of Execution”. For centuries, medical personnel have fixed things by adding tasks, resulting in a task oriented management system. This is so ingrained, and there is such a lack of process awareness that, even if you send a Lean or Six Sigma consultant in to re-design the process, and the new process is proven to be significantly better then the old one, the managers in the work area aren’t proficient in process management, only task management, so the process degrades back to the old task oriented way. Most managers’ days are executing a list of tasks: scheduling staff, monitoring budgets, managing overtime, etc. not walking the floors and ensuring staff are running the process correctly or monitoring for efficiency or defects. Forget about monitoring a dashboard and acting when a measure performed worse than expected. It’s actually not these poor managers’ fault, since they have never been trained to be process managers. They are kind of victims of the legacy health care management system. The other thing is, management training for new managers in health care is woefully inadequate. Often non-existent. It’s not unusual for a line staff employee to be promoted to a manager with no training, and they never get it.

In an ER in a hospital at which I had privileges, there was a fellow whose only job was to do workarounds for the processes that didn’t work well. They called him a gopher (he was actually a certified Medical Assistant) and he was held in high regard by the staff because he “fixed” the things that weren’t working. Like, if a department didn’t deliver what they were supposed to on time, he went down to the department and got the stuff and brought it up to the ER. That was his entire job. No one tried to hold the non-performing department accountable. Just add an FTE to do workarounds, who was a hero! Yikes!

Another Health Care cost sub-category is what is called Undertreatment. This means, treatments that should be given or should be utilized aren’t given or utilized as often as they should be. Like, vaccines aren’t given when they should be (this is especially true with children). Preventive health maintenance care (colonoscopies, mammograms, cholesterol levels, etc.) isn’t done when it should be. You get the idea. Secondly, sometimes there are practitioner misperceptions (“You can’t give a vaccine to a child with a cold”). Sometimes a practitioner doesn’t believe the test or treatment is useful despite literature data or expert opinion. Sometimes a practitioner just can’t keep track or doesn’t have a good reminder system. At any rate, the patient doesn’t get what they should when they should. That’s Undertreatment. And Undertreatment increases costs because of the cost of treating conditions that could have been prevented or detected early.

Most of the undertreatment problems are rooted in process deficiencies. And the blame is placed on the practitioner for not “doing what they should”. But both the practitioner and the patient are victims of the systems operating around them.

Ok, enough for this post. We got through Waste Category #1! In future posts, I’ll go through the rest of them.

There are six categories of waste.

The fundamental health care management system is task oriented, which is a mismatch given most of the problems in Failures of Care Delivery are process oriented.

Training in health care is really education, not training, and it is not very effective.